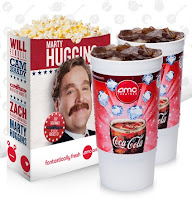 I posted this in my general deals category this morning and it got quite a response, so I thought I would put it up front and center.  AMC is offering 1/2 off a pick of two movie snack combos from now through next Thursday at select theaters nationwide.

I haven't seen Total Recall, even though I love the song from the last one.  I'm also intrigued about this Bourne movie even though Bourne isn't in it.  And instead of shoving McDonalds in my jacket as I slink past the ticket counter I'll just grab some of that low-fat popcorn and cola.