Southwest Nationwide Fare Sale into June from $59 One Way 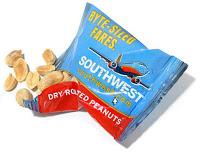 Southwest just released a new nationwide fare sale into June with fares from $59 one way.  I'd write something witty here but this is serious because I'm sick of the cold and this shows me there's a seasonal light at the end of this winter rainbow.

There are some amazing fares, some not-so-amazing fares, and some yeah-that-is-not-a-bad-price fares.  You just have to know where to look.  Whether you're looking to head to California, Florida, New York, Denver, Chicago, the Northwest, or Akron, there is a fare for you.  As usual, Southwest has cornered the market on deals to Vegas.  Save money for the tables and that stay at the El Cortez Hotel & Casino with a cheap flight.  All fares include FREE dry roasted peanuts and Diet Coke.

These fares are for travel through June 8 (except Sundays) and include government taxes and fees.  Book fast because they sell out fast.  Oh, and Southwest allows two checked-in bags free, unlike most other airlines.