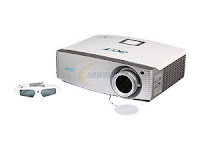 Through April 1 Newegg.com is emptying out their distressed inventory to make room for, well, new inventory. That means we get deals up to 75% OFF

. Prices start at just $9 and every order includes FREE shipping!

Sample deals include:
I put the watch in there because it's random they have it, it's a great deal, and I love watches. I wish I had the cash to buy the projector. You can take it with you on trips, plug your laptop into it, and watch a big screen off a wall from wherever you are. It's also great for video gaming. They're even tossing in a $100 promotional gift card with it.  Must... resist...

to view the deals at Newegg.com. Be sure to add the promo code for whatever product you purchase so you get the full discount.