Virgin America Flights into June from $69 One Way 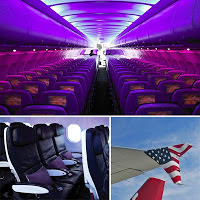 Top-rated Virgin America is offering flights this spring for as low as $69 one way. I can only say I have flown them once and would do it again in a heartbeat. It's like flying in a Las Vegas club, only with your own personal television and free Diet Coke.

While there are great fares across the nation (well, to wherever they fly), the coast-to-coast fares are some of the best I've seen in a while. Fares are valid for travel through June 12.

Sample fares include:
I wish they would fly to more cities, but Branson won't answer my phone calls. He must be busy jumping out of an airplane or flying into space. Best deals are for midweek and Saturday travel.