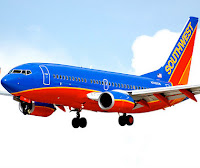 Get an early start on the warm season with a fare deal on Southwest Airlines.  They are flights from 70+ cities discounted as low as $59 one way through June 26.

Unlike some of their other sales, this one is not restricted to midweek travel only.  If a seat is available during the peak times, it's on sale for you.  The only blackout dates are June 14 and 16.

Sample fares include:
Government taxes and fees are included in the price too! So what's the catch besides seats filling up? This sale is only valid through Thursday, April 18. Get over there and get flying, ace.

Click here to view the cities and fares on sale at Southwest Airlines.