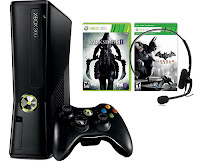 I'm an XBox guy. It's the controller, okay? It slides into my hands like a glove. You can spend a fortune on a new XBox One come winter, or grab this deal

from eBay today only.

For $280 (reg. $380) you get:
You also get this Xbox 360 Live 12 Month Gold Messenger Starter Pack with... All that and free shipping? Look, I paid $250 a few months ago and got half that amount of stuff, and I had to drive to the store to get it. Remember, it's not just a game console, but a streaming video player and a DVD player too. I cancelled my cable when I got this thing and never looked back.

to view the deal at eBay.