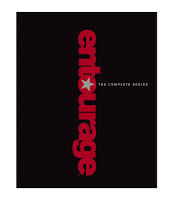 You guys seem to like when I put these DVD block sets up, so here' another.  Today only Amazon is offering up the entire Entourage television series

Apparently this show is sort of about Mark Wahlberg's introduction to Hollywood, but the best part is anything with agent Ari Gold.  If you haven't watched before, go on YouTube and check out his best parts.  He's insulting, he's arrogant, and he's hilarious.  That's eight whole seasons you can watch over and over again.

to view the offer at Amazon.com.