Virgin America Flight Deals into Spring from $59 One Way 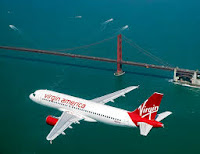 Virgin America, my favorite hip airline, has released some new deals on travel into spring.  Fly for as little as $49 one way.

Since VA is based in California, naturally the flight deals there are going to be a bit stronger, however this is a great time to book before the travel window closes.

Sample fares include:
Fares are one way and valid for travel through May 18. Other restrictions apply so check out their long list of mumbo jumbo restrictions on their site. Fly happy for once and fly Virgin, baby.

Click here to view the sale at Virgin America.